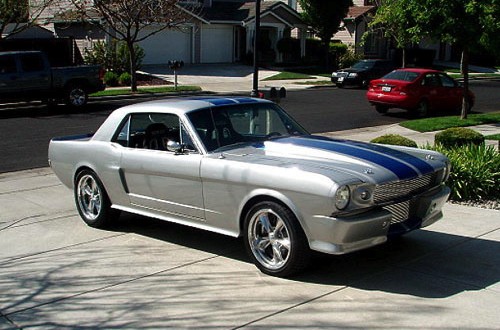 The Ford Mustang debuted as a simple sports car powered by a 170 cid six cylinder and a pair of V8’s. Originally named for the fighter plane, the P-51 Mustang, preliminary allusions were made to the horse, and the horse motif quickly became the emblem for the Mustang. Buyers loved its low price, long hood, short trunk styling, and its myriad of options.

Ford loved its high volume sales and visibility. In mid 1964, Ford introduced a sporty 2+2 fastback body style to go along with the hardtop coupe and convertible. Enthusiasts also cheered the new “K-code” 271bhp 289 cid V8 that finally put some performance to match the Mustang’s good looks. For those that wanted more, the legendary Carroll Shelby and Ford collaborated to produce the Shelby GT-350, a Ford Mustang fastback specially tuned by Shelby.

The 289 V8 produced 306bhp in street tune and around 360bhp in special GT-350R race tune. These Shelby’s had no back seat, were only available in white and were fully race ready.

The Mustang was restyled for 1969, gaining 3.8 inches of length, all ahead of the front wheels, and about 140 lbs in curb weight. The Mach 1 body style debuted in 1969 and came standard with a 351 cid V8 but could also be had with the 428 Cobra Jet, which now came in three states of tune. The first was a non-Ram Air version, followed by the Ram-Air version which breathed through a shaker hood scoop. Topping the list was the new Super Cobra Jet which came with the Drag Pack option. The Super Cobra Jet used the shaker hood scoop, a modified crankshaft and stronger connecting rods. The Drag Pack also came with limited-slip 3.91:1 or 4.30:1 rear axles and no air conditioning. All three engines were underrated at 335bhp. All this power overwhelmed the rear tires, which suffered from a 59/41% f/r bias which also hurt handling. But then, these Mustangs weren’t built for curves, just straight 1/4 mile lines.

The circle tracks were reserved for the Boss series of Mustangs. Named after stylist Larry Shinoda’s nickname for Ford president Semon “Bunkie” Knudson, the Boss Mustangs were built to qualify the 429 V8 for NASCAR. The Boss 429 package came with a race ready 429 cid V8 with ram air induction, an aluminum high riser and header type exhaust manifolds. Mandatory options included a four speed manual and a 3.91:1 Traction-Lok axle. Also included were an oil cooler, trunk mounted battery, race suspension, and the best interior Mustang had to offer. Although impressive on paper, the Boss 429s failed on the street where their dependence on high revs hurt their street starts and the initial batch had incorrect valve springs that would stop winding at 4500rpm instead of 6000rpm. Nevertheless, it had good handling and would last through 1970. To combat Chevrolet’s Camaro Z/28 in Trans Am racing, Ford built the Boss 302 which used a 302 cid V8 treated to the cylinder heads from the racing 351 cid engine and Ford’s largest carb. It was underrated at the same 290bhp as the Camaro Z/28’s engine and was available with the shaker hood scoop. Shelby Mustangs were still available, though they were more luxury oriented then ever before.

The 1968 Ford Mustang received a simpler grille and side trim and a limited number of 427 engines were slipped into the engine bays. These 427 engines were slightly detuned but still cranked out 390bhp, enough to strike fear on the streets. Then on April 1, 1968, Ford unveiled perhaps its most famous line of engines, the 428 Cobra Jet. It was based on the regular 428 but included larger valve heads, the race 427’s intake manifold, and an oil-pan windage tray.

It had ram-air induction and breathed through a functional hood scoop. Output was listed at 335bhp but was rumoured to be around 410bhp. The Shelby’s were still available, joined by an available convertible model and renamed the Shelby Cobra. The GT-350 dropped its 289 cid 306 bhp engine and gained a 302 cid 250 bhp engine. Midway through the year, the GT-500 was dropped and was replaced by the GT-500KR (“King of the Road”). The GT-500KR sported the new Ram Air 428 Cobra Jet, still underrated at 335 bhp.

1967 saw a massive restyle of the Ford Mustang. Changes included bulkier sheetmetal below the beltline, a more aggressive grille, a concave tail panel, and a full fastback roofline for the fastback body style. The engine compartment was also increased and Ford dropped in its big block 390 to compete against the new Chevrolet Camaro SS396. Although the 390 was slightly detuned for the Mustang, its popularity sealed the end of the high performance 289 cid engine, which was later dropped from the lineup. Of greater interest to enthusiasts was the availablitity of another Shelby-tuned Mustang. The GT350 was still powered by a modified 289 V8, though output dropped to 290bhp. The new GT500 was powered by a reworked 428 V8 (some were reportedly built with the even more powerful, race ready 427 V8). The 1967 Shelby’s were more civilized and sported numerous luxury options, which seemed to appeal to buyers. These would be the last Shelby Mustangs actually built by Shelby-American. All future models would be built by Ford with little Shelby involvement.

1966 saw further refinement of the Mustang. The gauge cluster was redone to separate the Mustang from its Falcon roots while the 260 cid V8 was replaced with 2 and 4 barrel versions of the 289 cid V8. The Shelby GT-350 was still available, though its race image was being diluted by the addition of an automatic transmission, a choice of four colors, and special examples that were prepared for Hertz Rent A Car (known as Shelby GT-350H) for rental to weekend drag racers. Available on the GT-350 through 1968 was a Paxton supercharger which would boost horsepower by as much as 40%. 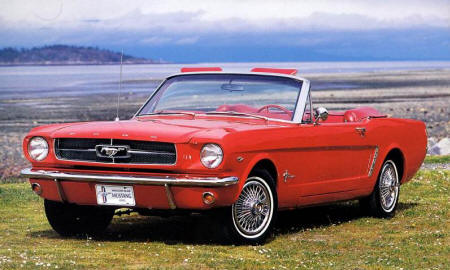 The date was April 17, 1964. Intermediate sized muscle cars, with big block engines were gradually replacing the full-sized muscle car. Lee Iacocca, Ford’s General Manager, had always envisioned a small sports car to be the next hot item in the street wars.

Ford decided that instead of improving their lackluster intermediate, they would do the competition one better and introduce a whole new breed of automobile, the pony car. Originally designed as a two seater in the European tradition, Iacocca realized that true success depended on volume sales.

Therefore the Ford Mustang was introduced as a 1965 model that was based on the compact Falcon to lower production costs. It came with an obligatory back seat and a multitude of options that would give the buyer an opportunity to customize their purchase, and generate extra profits for Ford.

Plymouth faithful stress that their Barracuda beat the Ford Mustang to market by two weeks. But it was the Mustang, which racked up over 22,000 sales its first day and one million sales in its first two years, that turned the market and people’s attention to the pony car. The pony car class that the Ford Mustang helped create is the only class of muscle car that still exists today.